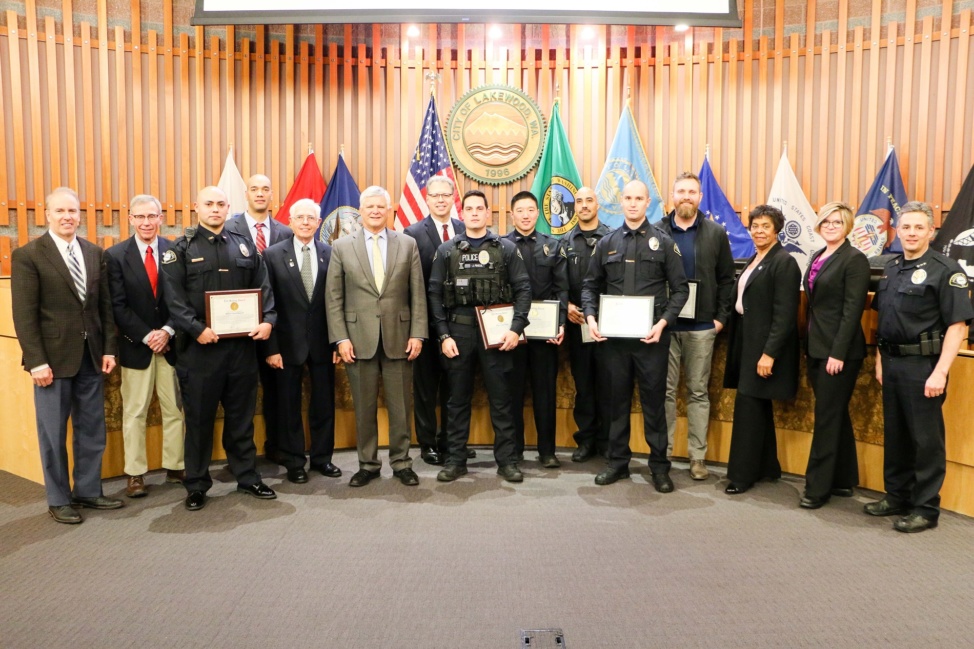 The Lakewood City Council celebrated the recognition of nine Lakewood police officers for life-saving efforts which resulted in four people surviving their injuries.

The recognition came as part of the council’s Feb. 18, 2020 regular meeting.

Police Chief Mike Zaro presented the awards, sharing the details of each incident and the critical steps the officers took to save the lives of these people who otherwise may not have lived.

In February 2019 the officers responded to a gas station for a report of a man who had just been shot. When they arrived the officers assessed the scene quickly, discovering the shooting victim was shot several times and had a life-threatening arterial injury. The officers applied pressure to the arterial bleed, while maintaining a calm and composed demeanor until fire and rescue crews arrived. Their immediate critical aid was essential in helping the man survive a fractured hip and seven gunshot wounds.

In June 2019 the officers arrived to a report of a shooting to find active gun fire and people running for cover. A victim with a gunshot wound was located inside a residence in direct view of the armed suspect who was firing. The victim had life-threatening wounds and needed immediate medical attention. Without hesitation the officers ran to the victim with minimal cover, risking their own safety, and pulled the person to safety. They took the victim by patrol car to where medical responders were waiting in a safe staging area. The officers’ quick actions saved the person’s live.

In November 2019 the trio responded to reports of a man who was shot. Upon arriving, the officers had to immediately assess the safety of the situation while also starting first aid on the victim who had multiple gunshot wounds. The officers applied a tourniquet to the victim’s arm and applied bandages to other wounds with speed, efficiency and teamwork. West Pierce Fire & Rescue medics and hospital staff commented on the great medical care the victim received from the officers prior to being taken to the hospital.

In December 2019 the officers were dispatched to help West Pierce Fire & Rescue with a person who possibly overdosed. The officers arrived before medical personnel and found a person inside a residence unconscious on the floor. Officers Wellman checked for a pulse and began CPR while Officer Maulen prepared a container of Narcan (a life-saving emergency medication for opiate overdose) and administered it. Within minutes the person regained a pulse and consciousness. When medic crews arrived the person was able to walk to the ambulance. The West Pierce captain commended the officers’ quick actions and said if they had not done CPR and administered the Narcan the person would not have lived.