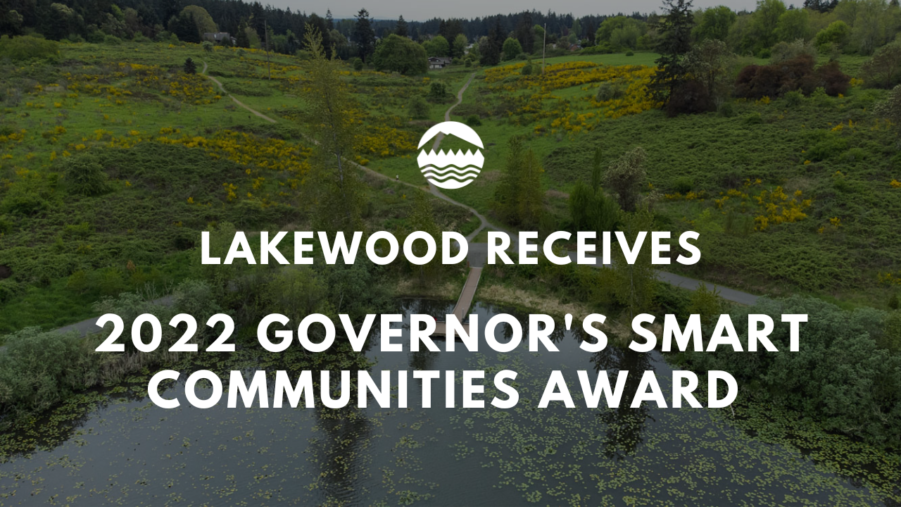 Lakewood was recognized Tuesday as a leader in the state for its work on climate change and planning for population growth in the coming decades.

The city was one of eight cities across the state to receive a 2022 Governor’s Smart Communities Award. Lakewood was awarded the Smart Climate Strategies Award for its work on climate change – specifically, the addition of a chapter on energy and climate change to its Comprehensive Plan. The award recognizes plans, policies, programs and actions addressing community climate impacts.

“It is an honor to see the city recognized for its proactive planning efforts aimed at improving the quality of life for current and future residents,” said Lakewood Mayor Jason Whalen. “We’ve made significant strides, but we still have work to do and the Lakewood City Council is focused on next steps as it relates to policies around growth and future climate impacts.”

In 2020, Lakewood proactively developed climate change policies, incentives and voluntary actions, and potential regulations ahead of state or regional mandates. City staff used data on city-specific greenhouse gas (GHG) sources and anticipated climate change effects with an eye to the future and an expectation that thousands of new residents could call Lakewood home by 2050, as outlined in regional growth planning documents. The goal is for most of these new residents to move into missing middle and higher density housing in the city’s Downtown and Lakewood Station District subareas. The city’s planning also accounts for thousands of new retail, commercial and industrial jobs.

The Lakewood City Council adopted the new chapter in 2021.

The city also received the Judges Merit Award. In its announcement of award recipients the state Department of Commerce said:

“The 2022 Judges Merit Award goes to the city of Lakewood for their Lakewood Station District Subarea Plan, Code and Planned Action (LSDS Package). Adoption of the LSDS Package is the realization of a community vision included in the Lakewood Comprehensive Plan for the subarea since incorporation, as well as the city council’s strategic plan. Prepared between November 2019 and May 2021, it serves as an outstanding example of smart visioning, housing, and equity strategies that other jurisdictions can follow.” Read the full announcement.

Launched in 2006, the Governor’s Smart Communities Awards program annually recognizes local governments and their partners for exceptional work in implementing the state’s Growth Management Act (GMA) to shape future growth, economic vitality and quality of life in communities across Washington.