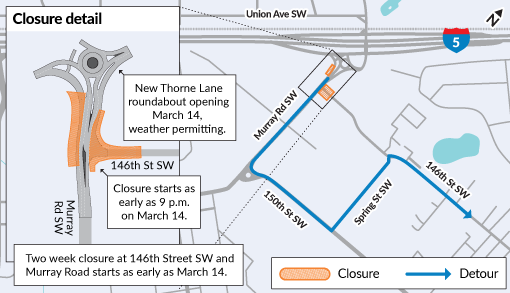 FROM WSDOT: Travelers who use Interstate 5 and the Thorne Lane interchange in Lakewood will need to plan extra time into their trips starting this weekend.

If the weather allows, during the overnight hours of Saturday, March 14, construction crews will open the newly realigned northbound I-5 exit to Thorne Lane and the new roundabout. During the overnight work, the following closures will occur for paving and striping:

Union Avenue closed until late May

As long as all ramp connections at the new Berkeley Street overpass are open, as early as 8 a.m. on Monday, March 16, a one-block section of Union Avenue will close between Spruce Street and Thorne Lane.

The closure allows construction crews to raise the profile of Union Avenue over 23 feet so the street can connect with the new Thorne Lane overpass. The around-the-clock closure will be in place until the end of May.

During the closure, travelers will detour on Thorne Lane to Portland Avenue and to Berkeley Street. The I-5/Thorne Lane interchange will remain open during daytime hours. The Washington State Department of Transportation published a blog about the upcoming closures earlier this week.

An updated construction schedule that lists overnight ramp closures for this project is available on Tacomatraffic.com. Before heading out the door, travelers can find the latest road conditions on the WSDOT app and by following the WSDOT regional Twitter feed.