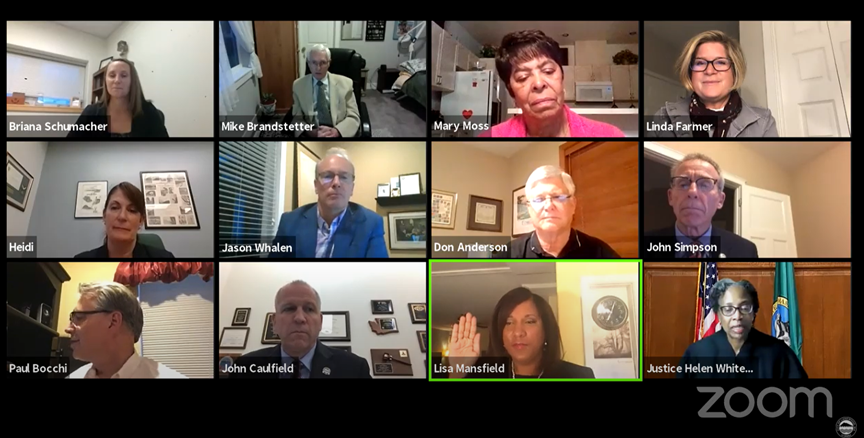 The city of Lakewood appointed Lisa Mansfield as the Lakewood Municipal Court Judge on September 21, 2020.  Due to COVID-19, the swearing in ceremony occurred virtually during the City Council meeting – a first for the city.  Judge Mansfield was sworn in by Washington State Supreme Court Justice G. Helen Whitener.

Judge Mansfield will serve as the Lakewood Municipal Court Judge for the remainder of Judge Adams’ term which expires December 31, 2021.  The Lakewood Municipal Court Judge serves in a part-time capacity to the cities of Lakewood, University Place, DuPont, and the town of Steilacoom. Judge Adams was appointed by Governor Jay Inslee to serve on the Pierce County Superior Court starting October 1, 2020.

During the swearing in ceremony, Judge Mansfield expressed her gratitude to the people of Lakewood, stating:

“I look forward to serving you. I look forward to treating each and every person that comes before me with the respect that they deserve. I am honored to be here and I will faithfully do my duties to the best of my abilities. I will treat everyone equally under the law regardless of who they may be.”

“We are so excited and feel very fortunate to have Judge Mansfield join the Lakewood Municipal Court. This process was extremely competitive, we had a lot of great candidates. Ultimately, Judge Mansfield shone the brightest – her commitment to the profession and the greater community is unparalleled.  I have no doubt she will do great things while serving our communities in this capacity,” stated Lakewood City Manager John Caulfield.

Judge Mansfield received her Juris Doctorate degree from the University of Washington School of Law, Seattle, WA and her Bachelor of Arts degree from Columbia University, New York, NY.

Judge Mansfield was born in Nashville, Tennessee.  She and her husband, Dan, have been married for nearly 15 years and have one child.

Judge Mansfield was awarded the Pierce County Standing Ovation Award for Leadership 2018 for her work in implementing and promoting Washington’s First Safe Babies Court Team. She is a member of Rotary 8.  She enjoys writing and has been a frequent contributor to Pierce County Lawyer Magazine and the Washington State Bar News.