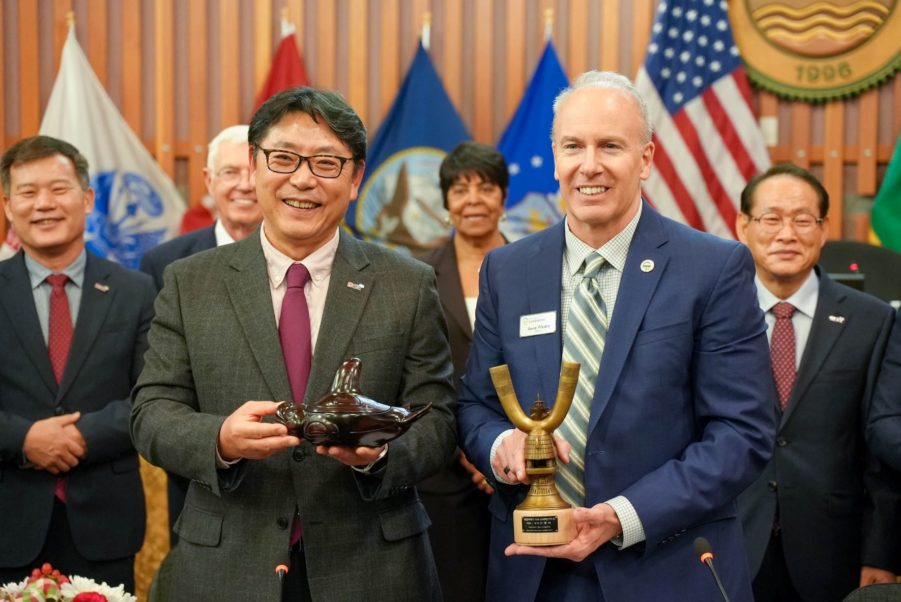 The Lakewood City Council was joined earlier this week by a delegation from Gimhae City, located in the South Gyeongsang Province in the Republic of Korea. The visit was one of celebration, as the two municipalities formally recognized their long-standing relationship with the establishment of an official “Sister City” designation.

Mayor Jason Whalen and Gimahe Mayor Hong Tae-yong made the partnership official at a signing ceremony Dec. 5, 2022 in front of guests and members of the public at the City Council meeting.

“It is with a hopeful heart that our two cities move together and unite on this path of cooperation for shared growth with each other’s expectations, wishes, and strong sincerity for a thriving, collaborative friendship,” said Mayor Whalen at the meeting before inviting Mayor Hong and Lakewood Sister Cities Association President Connie Coleman-Lacadie to sign the agreement.

Officials used special pens to sign the document. They were made by a local artist with wood from Gingko and Garry Oak trees – both trees of significance to the respective cities. They also exchanged gifts to commemorate the occasion.

As sister cities, Lakewood and Gimhae agreed to “seek mutual prosperity and development by promoting multiple forms of exchanges and cooperation in administration, the economy, education, culture, sports and other areas under the principles of reciprocity and equality.”

The expanded relationship brings with it a commitment to maintain exchanges, including visits to the respective cities by official delegates, and come together on projects and areas of shared interest.

Joining the ceremony was Lt. Colonel Bernard West, Deputy Commander of the Lancer Brigade. West was invited to participate because of the city’s strong ties to Joint Base Lewis-McChord and its community connector, the 2/2 Stryker Brigade Combat Team. The 2/2, also referred to as the “Lancer Brigade” is currently serving a nine-month deployment in the Republic of Korea and is the first Stryker unit to serve as the Korea Rotational Force.

Historically, the Lancer Brigade traces its lineage to the Republic of Korea, having fought in well-known battles such as Chipyong-ni, Heartbreak Ridge, and the Chosin Reservoir, earning a combined total of 30 campaign streamers. Over the years it has strengthened the Ironclad Alliance, which dates to 1953.

In his remarks, Mayor Whalen thanked Gimhae City for sending 10,000 KF94 masks and 1,000 sets of personal protection equipment (PPE), which includes body suits, N95 masks, gloves, eye protection, and shoe covers, to the city in August 2020.  The masks and PPE were donated by Gimhae as an act of support, collaboration and friendship between the two cities.

The 10,000 masks were distributed to residents, non-profits and local businesses.  The PPE sets were used by first responders, police and fire and for city responses to clean-ups involving potential workplace exposures to COVID-19.

Each entry included a description, adding a personal and meaningful touch to the art. The city is grateful for its Sister City partners and Gimhae CIty staff who translated the artwork descriptions.