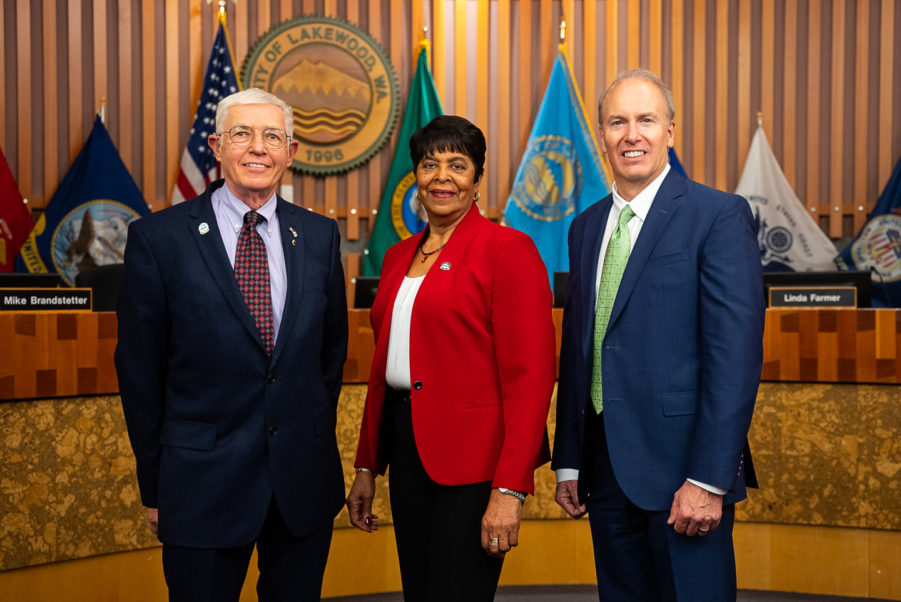 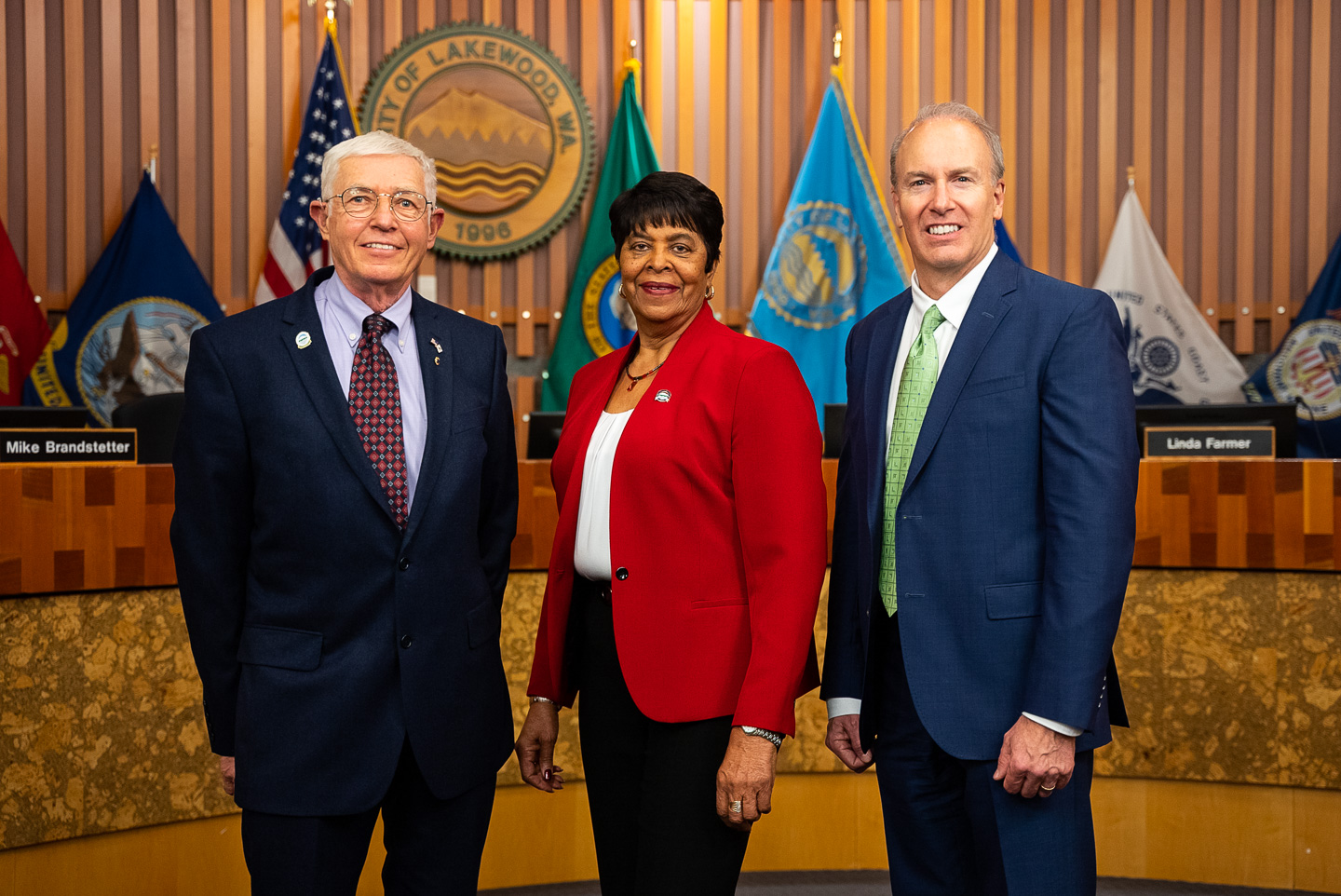 Councilmember Mike Brandstetter was sworn in to commence his new term after his reelection in November.

2021 is in the books – enjoy this photo album reflecting upon the highlights of the year:
“Lakewood in 2021: The Year in Photos”

Garbage service has been disrupted by recent weather. Waste Connections should have contacted you about scheduling adjustments. Call 253-875-5053 with questions.

I-5 is closed in Lewis County and I-90 is closed at the Snoqualmie Pass due to weather. Check the WSDOT road map before traveling this weekend. Some water has pooled on local roads. Drive carefully.

At the time that we were sworn in 12 years ago, it was one of the darkest hours that this city has experienced. In November, just after our election, we suffered the loss of our four police officers. For those of us that were here and experienced that, it was an indelible memory and a lightning rod for how we were going to work together as a team and work with this community to do great things.

I think this council rose to that and many other challenges over the years. The proof of all of it to me is that this job and this work is worth the effort. It’s an opportunity for us as ordinary people to work together to do extraordinary things. It doesn’t happen alone, and it doesn’t happen without consensus building and teamwork.
– Jason Whalen, Mayor of Lakewood

Reelected in November, Mike Brandstetter was sworn in to begin a new term on Monday night. He was first elected to the Lakewood City Council in 2009.

2021 is history. It was a year that many of us might remember for its challenges, but there was much to celebrate. It was a step towards a return to normal. Events, art, gatherings, music, and celebrations returned to Lakewood after a year deprived of those joys.

Enjoy this selection of photo highlights from 2021.

The City of Lakewood has migrated to a new permitting software: CED+. The interface matches permit dashboards used elsewhere in Pierce County, offering applicants and the interested public a simple and standardized experience across jurisdictions.

The new dashboard is accessible here. Older permits are still reviewable through the City’s Archived Permit Search. Permit-related questions may be sent to [email protected]

Snow, ice, rain, and flooding are causing a number of issues around Lakewood. City staff and our partners are working to respond.

The City’s event calendar has been updated to reflect planned 2022 events. Summerfest is scheduled to return in 2022, and a new “Saturday Street Festivals on the Plaza” series of events is planned. Farmers’ markets, outdoor concerts, and many other events will return. Drive-in movie nights will not return in 2022.

Registration is full – all 32 team slots have been filled for Lakewood’s upcoming film contest: Reel Life ’96. Participating groups must create a 4-minute film in 4 days based on a theme. The films will be screened in March at a public event.

The City will pay tribute to Dr. Martin Luther King, Jr on Jan. 15, 2022 (the holiday is on Jan. 17). The City will premiere a video based on a theme of “The World Lives in Lakewood”, a nod to an inclusive mural made by Clover Park High School students.

Jason Whalen, Mary Moss, and Mike Brandstetter were each sworn in to begin their new terms after their November reelections. Former Mayor Don Anderson nominated Jason Whalen to be the next mayor, and the Lakewood City Council voted in unanimous support: Jason Whalen was appointed as Lakewood’s fifth mayor. Mary Moss was appointed to the position of deputy mayor.

Jan. 17, 2022 was proclaimed as Dr. Martin Luther King, Jr. Day of Service. The consent agenda was approved, which included the approval of an MOU between the City and Rotary Club of Lakewood, and the execution of an interlocal agreement to maintain the Puget Sound Auto Theft Task Force.

Need a job? We’re hiring!
Spot an issue? Report it!
Have an opinion? Share it!