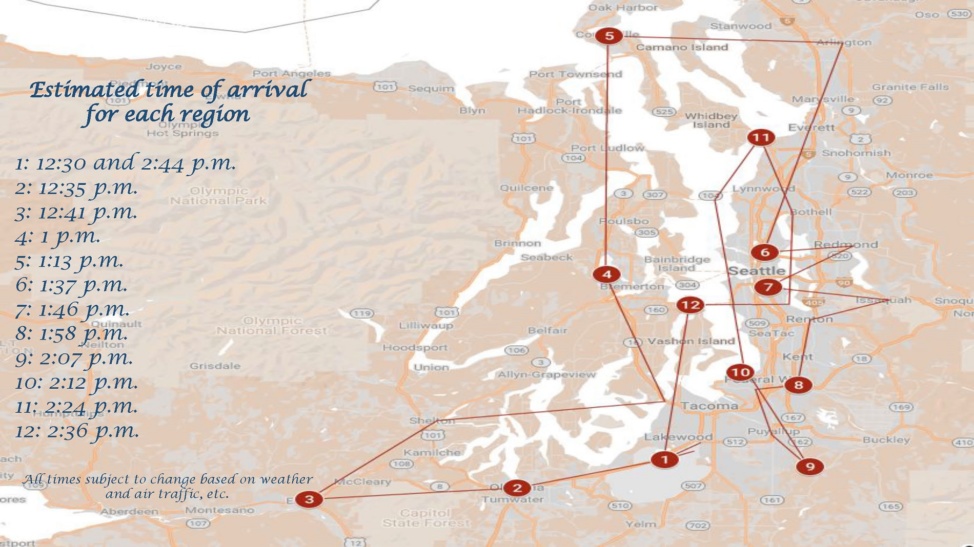 FROM THE 62nd AIRLIFT WING:

The 62nd Airlift Wing will salute American heroes at the forefront in the fight against COVID-19 during an Air Force Salutes morale flyover throughout Washington State’s Puget Sound region, May 8, 2020.

During the event, the wing will conduct a C-17 Globemaster III two-ship formation flyover over the following healthcare facilities and places of interest.

“The 62nd AW salutes each American serving on the frontlines in combat against the COVID-19 pandemic,” said U.S. Air Force Col. Robert V. Lankford, commander of the 62nd Operations Group. “We are grateful for the opportunity to show our appreciation to local heroes, and look forward to a time when we can embrace one another without fear.”

From 12:30 to 2:40 p.m., the 62nd AW will conduct a C-17 Globemaster III two-ship formation flying over 30 healthcare facilities throughout the Puget Sound region, including those in the greater Olympia, Tacoma and Seattle metropolitan areas, as well as other areas of interest.

The Air Force is hosting Air Force Salutes flyovers throughout the nation’s largest metropolitan areas in an effort to show appreciation to the thousands of American heroes who are at the front line battling COVID-19 and providing the support that America needs.

The 62nd AW wants to interact with the Puget Sound region and local leaders through the means of social media. The public is encouraged to submit photos of the flyover through the 62nd AW Facebook page’s messenger inbox (@62AirliftWing). Those photos will be entered into a competition for the best photo. The winner will receive a patch from the C-17 Demo Team performing the flight. The winner will be posted to the 62nd AW Facebook page by May 15.

Please note: All times are estimated arrival times based on the best available information. Due to weather, air traffic and airspace requirements times may shift slightly. Additionally, real-world airspace conflicts may prevent the 62nd AW from flying over every planned hospital.