June 4th marks National Donut Day, and there were reports of delicious activity in the area. We visited our two local donut shops for their thoughts on the art of perfecting the donut.

Established in 1959, the Original House of Donuts is a classic donut spot in Lakewood. Their sparkling sign and distinctive building attract the curious, and the dazzling selection of donuts seals the deal.

Their display case is full of eccentric and creative donuts from crullers to cakes. Red velvet, devil’s food, buttermilk – everything has a unique twist. Even the classic glazed and filled donuts are unusual in their sheer heft – you might want to cut one of these in half.

A line of cars had formed at their drive-up window and another line of customers on foot streamed out the front door during our visit today. As each was handed their distinctive orange OHOD box of donuts, we saw a smile spread across each face.

Manna Webber is the art director at OHOD – she’s responsible for the iconic and angular logo adorning every box.

“We’ve got a few seasonals that are popular right now – we’ve got a blueberry fritter, raspberry raised, and lemon cakes. But our big hitters are always going to be our apple fritter, our maple bar, our bacon maple bar (obviously), and the old-fashioned glazed.”

For a business established in the 50’s, they sure find ways to keep things fresh.

“Our red velvet cake with cream cheese frosting on the top is probably the ‘trendiest’ donut we have, but we do something new every month. Last month was a donut daisy in the shape of a flower with raspberry and lemon, and this month’s special will be announced later today!”

Variety Donuts is situated across town from OHOD, right along South Tacoma Way in Lakewood’s International District. Sina was working the counter today, helping a stream of customers to make up their minds as they took in the splendor of the donut case.

We watched over and over again as customers came in and stood frozen before the case, spoiled for choice. The Boston Cream could be the right move, or should they round out their dozen with a classic sprinkle? Hands on their hips, they stood, they pondered, they hemmed and hawed. At last, they pointed at their selection.

Variety Donuts lives up to its namesake. They specialize in representing the classics. A mix of bars and rounds and glazes and fills, their roster is of a more traditional nature.

Founded in 2019, Variety Donut’s young business has weathered some tough times in the pandemic, but they’ve come out the other side intact and with a flow of customers happy to have a local spot for a great cup of coffee and donuts for their colleagues.

As Sina says, “I like the maple bar and the double chocolate – we already sold out of that one this morning! Sales are strong even with the pandemic, but things are getting better all the time.” 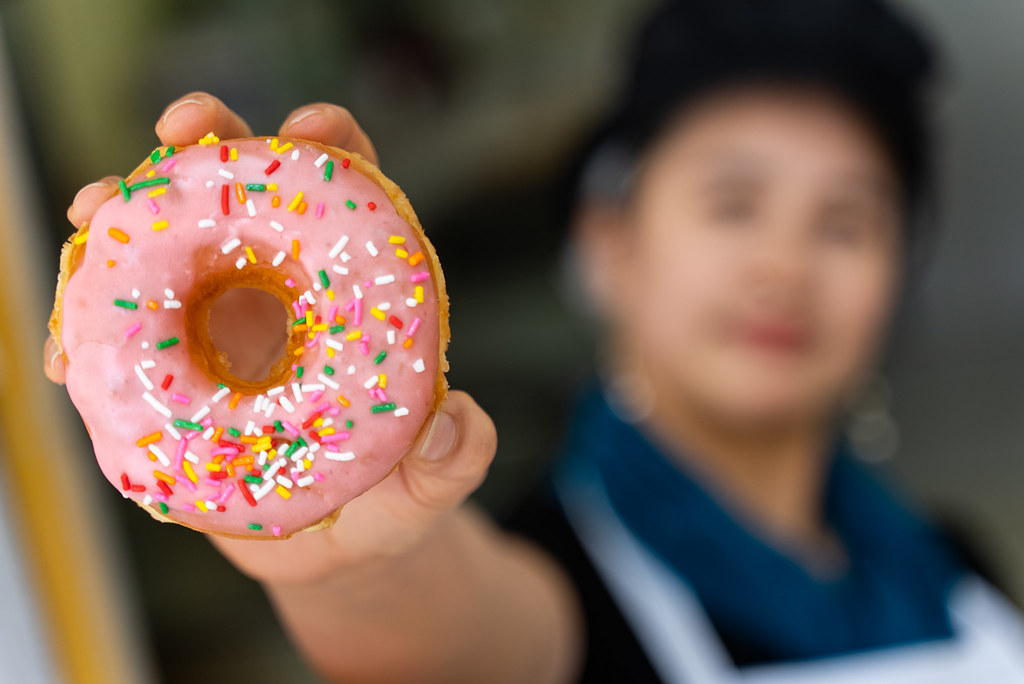