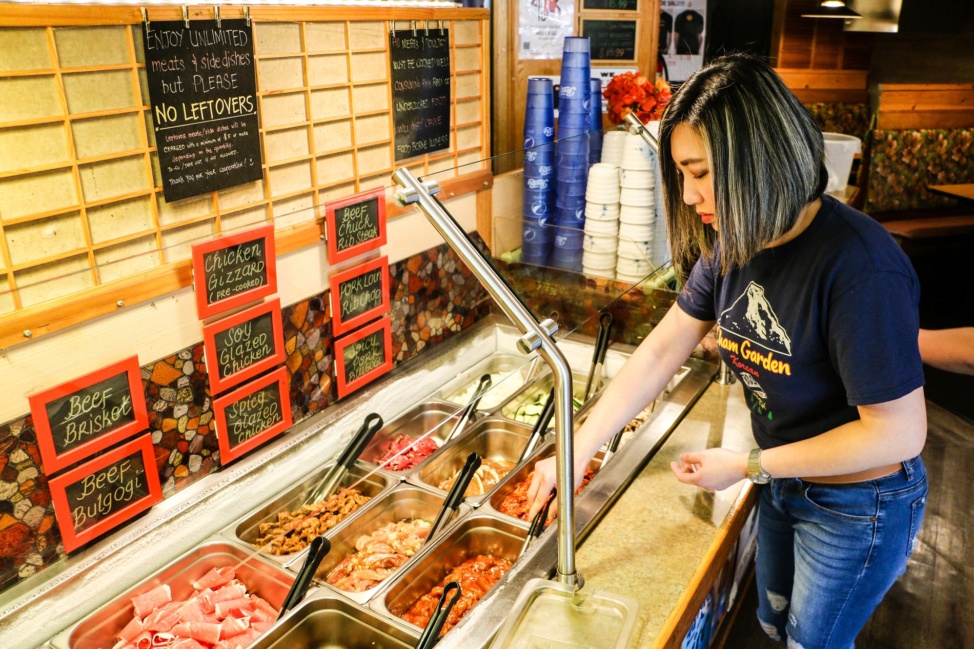 In 2015 Jay and Kay Lim moved to Washington from Chicago after Jay was stationed at Joint Base Lewis-McChord. The couple quickly began exploring their new home.

That included discovering the local food scene in Lakewood.

“This was the first restaurant we visited when we moved here,” Kay said from a high-backed booth at Cham Garden, a Korean barbecue restaurant located at 10518 South Tacoma Way, just south of the intersection with state Route 512.

Little did the couple know at the time that three years later they would become owners of the cozy establishment that draws diners to Lakewood from across Puget Sound and beyond.

Unlike other Korean barbecue restaurants where patrons order from a menu and receive a plate of one or two meats, Cham Garden offers its visitors an all-you-can-eat experience. Diners select items from a buffet that includes raw, thinly sliced meats – some seasoned in authentic Korean marinades – and fresh vegetables to be cooked at tabletop gas-fired grills.

Customers also choose from an array of made-fresh-daily banchan, or small side dishes traditional to Korean cuisine.

“Here you have variety and you pick your meat. Here you can pick everything you want,” Kay said of what makes Cham Garden unique. “If you love fish cakes, get the whole tray, as long as you finish it.”

When the Lims purchased Cham Garden, they knew they wanted to keep the family feel that drew them in in the first place.

They also wanted to keep the traditional Korean cuisine that customers love.

“We didn’t change the ingredients, but we adjusted them to improve the flavors,” Kay said.

Kay’s parents also got involved. After running a food establishment for nearly two decades, her parents shared their insight and experience and researched authentic Korean recipes to step up some of the dishes.

Cham Garden prides itself on offering food made from scratch. Nothing is premade and bought from the store. In fact, the restaurant now offers banchan to go after customers requested to buy it to have at home because they couldn’t find comparable flavors at the store.

Other changes the Lims implemented include allowing reservations. With only seven tables and a far-reaching reputation as a destination for foodies, Cham Garden fills up quickly. The couple wanted to offer guests the guarantee that if they travel to Lakewood to eat, they would be seated. Calls typically come in the morning and by afternoon the restaurant is filled with people from all over. Diners come from as far north as Everett, across the Narrows bridge in Kitsap County and even from Oregon, Kay said.

As the couple celebrates their two-year anniversary of restaurant ownership – they closed March 1, 2018 – Kay said she thinks they’ve finally found their groove. Jay has remodeled parts of the interior and they have plans to continue its upgrade. They also hope to expand the footprint to double the current capacity to serve more guests.

Reflecting on the major life change they embarked on on a whim, Kay said she is thankful to the original owners who trusted them to carry on the traditional Korean dining experience.

Because of its reputation as a destination restaurant that brings visitors from across the state to Lakewood, and because of its commitment to provide a unique dining experience that welcomes and treats everyone as family, the Lakewood City Council recognizes Cham Garden as its March 2020 Business Showcase.