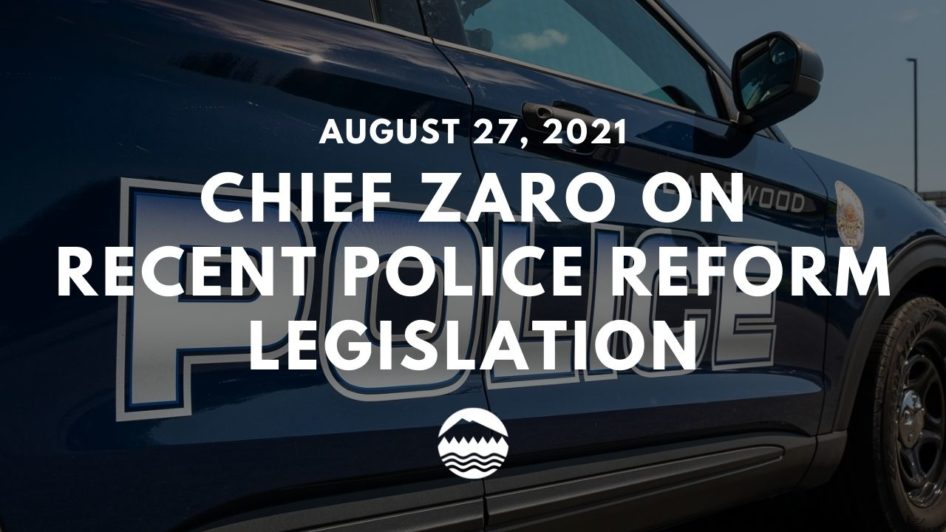 There has been a lot of talk in Washington about changes to policing from our recent legislative session. Many changes are administrative in nature and may not be noticed by our community. There are a few, though, that may affect how police handle some situations. I would like to discuss the potential impacts of some of those changes.

The two bills with the most significant effects for us were House Bills 1054 and 1310. They are respectively titled the Police Tactics Bill and Use of Force Bill. House Bill 1054 does things like restrict the types of equipment and techniques we can use, and limits our ability to engage in vehicle pursuits.

In my estimation, the biggest change is found in the Use of Force bill. This bill changes the legal threshold that must be met for officers to use any amount of physical force. There now has to be probable cause for arrest, or the person must pose an immediate threat to the officer, someone else, or themselves.

Let’s say that a store clerk calls 911 to report that she was just robbed by a white male with purple hair, a green shirt, and carrying a brown backpack. The suspect fled the store on foot immediately after the robbery.

An officer is in the area and sees a white male with purple hair, a green shirt and a brown backpack running down the street away from the store. The unique description of the suspect and the proximity to the store would lead a reasonable person to believe he may be involved. This is reasonable suspicion.

When the running suspect refused to comply with any verbal commands to stop, the officer would have had to let him go to continue on to the store where he would conduct the investigation and work to identify the suspect at a later date.

We also respond to many incidents involving people in crisis, and nothing in the new law differentiates between a criminal suspect and a person in crisis.

Let’s look at a situation in which officers may have to walk away when they might have previously intervened. Officers respond to Ft. Steilacoom Park following a report of a male sitting in the grass and yelling at trees. He has not committed a crime. When officers arrive they find the male yelling at trees, clearly hallucinating, in a mentally unstable state. He is unable to coherently respond to officers.

Medical aid and a mental health professional arrive, and everyone is in agreement that the male needs psychiatric evaluation and is unable to make that decision for himself. He screams “no” when officers try to convince him to go to the hospital.

Despite the clear need for help, this person has not committed a crime and is not an immediate threat to himself or anyone else. Officers must then walk away when we previously may have involuntarily committed the person for evaluation and treatment.

One might dismiss these as rare outliers, but our officers are faced with similar decisions routinely.

While this is admittedly going to be a difficult change in practice for us, this is the law, and we shall abide it. LPD will adapt, continue to respond to calls, and protect and serve this community.

Our top priority is the safety of this community, and Lakewood has our whole-hearted commitment to maintain that focus.