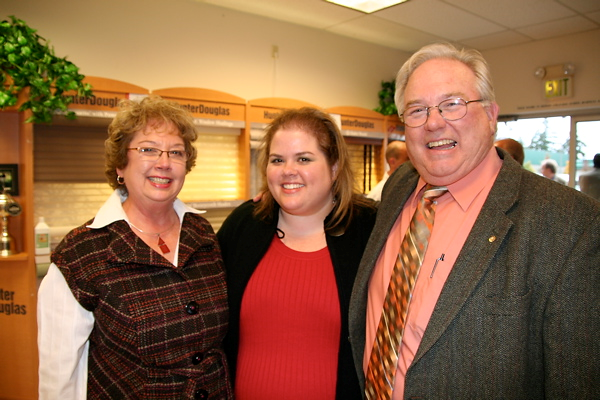 At the virtual Lakewood City Council meeting on Tuesday, Jan 19, Sally Saunders and Mayor Don Anderson presented the Larry Saunders Service Award for 2020 to the Selden Family of Lakewood. This award partners Lakewood Community Foundation Fund with the City of Lakewood to annually acknowledge exemplary dedication and service to the Lakewood community.

The Selden family service to Lakewood goes back to 1958, when Ed Selden became a Rotarian. Ed later served as president of the Lakewood Chamber. Rick Selden, Ed’s son served at the first Rotary Pancake Breakfast (1961) as a teenager. Rick joined Rotary and eventually served as the President and was bestowed Rotarian of the Year.

Sharon Seldon, married to Rick, is also active with the Rotary and its projects. Sharron served as WWEE President in 1991, LASA Volunteer of the Year in 2019, and recipient of the Junior League’s Ruth Wheeler Award in 2019.

Not be outdone by her parents, Rick and Sharon’s daughter Gayle is a past president of the Junior League, serves on the City of Lakewood Police Oral Board, and is herself a Rotary past president and Rotarian of the Year.

Ed, Gayle, Rick, Sharon, and Gayle have brightened the life and legacy of hundreds of families touched by Rotary service over the years, inspiring other hands and hearts along the way.

“We are extremely humbled and honored to receive the Larry Saunders Community Service Award. I think it is fair that we are the worker bees—being involved and trying to help others to be involved. I think Larry was that same kind of person. Leading by example, getting others involved and not afraid to roll up his sleeves and get to work.”

The Larry Saunders Award comes with a $1000 grant to a non-profit organization (501c3) in Lakewood, courtesy of the Lakewood Community Foundation Fund. The Seldens have chosen West Pierce Cares to receive these funds to expand their Automatic External Defibrillator (AED) program in Lakewood. In further recognition of the Seldens, the Rotary Club of Lakewood members donated another $2300 to this cause.

The inspiration for this community service award is Larry Saunders, who served our country and the city of Lakewood with distinction After he retired from the Army he helped organize Lakewood’s initial Police Department, and served as our first chief. After returning from Iraq, where he re-joined the Army to establish a police college in Baghdad, Larry embraced Lakewood with tireless community service volunteering and helping with the Boys & Girls Club, Lions, Rotary Clubs, neighborhood associations, and the Lakewood Community Foundation Fund (LCFF). Larry unexpectedly passed away in 2016.