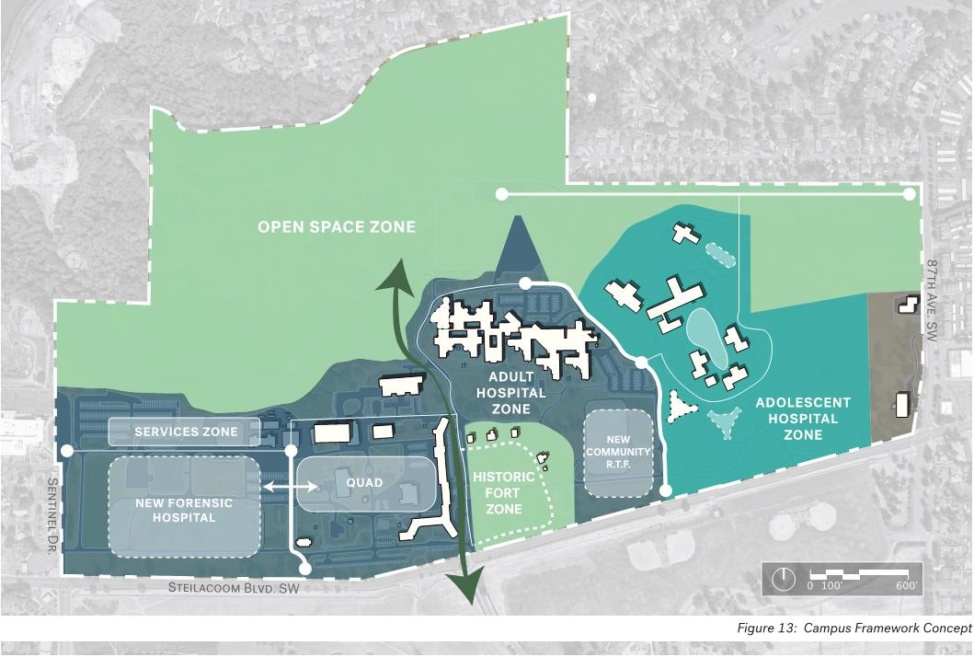 JUNE 2021 UPDATE: The DSHS Master Plan has a dedicated website – visit this address to review the plan and submit your comments: https://wshmasterplan.org/. The 2021 public comment period concludes July 7th.

The state Department of Social and Health Services has proposed a complete reconstruction of Western State Hospital and its campus.

The city of Lakewood is currently accepting public comment on the proposed changes outlined in the update to the Western State Hospital Master Plan.

The changes are necessary because many of the site’s existing facilities are aging and no longer comply with federal standards for the care of mental health patients. That’s according to the application the Department of Social and Health Services (DSHS) submitted to the city to update the Western State Hospital Master Plan.

In the short term DSHS, which operates Western State, wants to temporarily expand the hospital capacity and build a new 350-bed forensic hospital on the property. This would include demolition of several existing buildings on the site.

The state also proposes building a second, 18-bed residential cottage at the Child Study and Treatment Center and a treatment and recreation center.

Long term, the state’s goal is to transition the hospital to serve primarily forensic patients (those who have been processed through the criminal justice system) and fewer civil commitment patients, which make up the majority of the approximately 850 patients on site today.

This transition is in line with Gov. Jay Inslee’s five-year plan to modernize and transform the state’s mental health system and expedite efforts to end civil patient placements at the state’s large hospitals by 2023.

Instead these placements would be made in smaller, community-based facilities that are primarily state-run, with some community hospital capacity throughout the state.

Lakewood is the lead agency for State Environmental Protection Act (SEPA) review process for the application. Part of that process includes receiving public comment about potential impacts associated with the project.

The public comment period provides the opportunity for the public – including those outside the city – to provide their opinion on the changes proposed for Western State.

All persons may provide written comments about the proposal to:

Electronic comments can also be made via a project website at wshmasterplan.org or by email to Planning Manager Courtney Brunell at [email protected].

Comments must be received no later than 5 p.m., July 10, 2020. Any person wishing to become a party of record should include the request with their comments.

A public hearing date has not yet been set.

Applicant: Bob Hubenthal, DSHS (all questions regarding the application should be forwarded to city staff below)