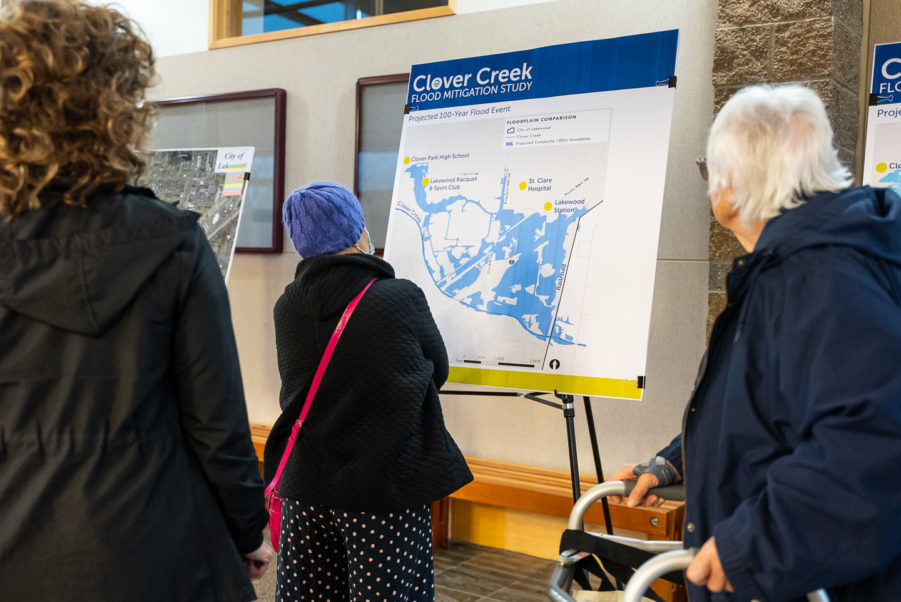 The City of Lakewood hosted an open house to discuss new floodplain maps on Tuesday, April 12. New data shows a greater risk of flooding in the Springbrook and Hillside neighborhoods, and across I-5.

In the event of a “100-year flood”, several feet of water may inundate homes, businesses, and roads in the floodplain. A 100-year flood has a 1% chance to occur in any given year.

“Many of us have lived here a long time and not seen serious flooding, but the best scientific data available shows a risk. A rain-on-snow event in the late 90’s caused some local flooding, but that event was much smaller than what a 100-year flood would be.”
– Paul Bucich, Public Works Engineering Director, City of Lakewood

FEMA last published a floodplain map in 2017. That map was based on data recorded in 2009, but its release was delayed by litigation. City staff observed that the 2017 map excluded I-5 from the floodplain, but believed the interstate to be vulnerable to flooding.

The City commissioned a new study in 2019. The new study used better technology than was available in 2009, including LIDAR topographic scans. The new data identified a larger area at risk of flooding, including I-5.

Unless an engineering solution is devised, the new data will become the official FEMA floodplain. Much of the Springbrook neighborhood was already included in the 2017 FEMA map. The new data may affect future development in Springbrook. Properties in the expanded floodplain may need to buy flood insurance.

The City is beginning a process to consider ways to reduce flooding. The City has organized a stakeholder group including the Nisqually and Puyallup Tribes, JBLM, WSDOT, and Pierce County.

The group will produce three engineering concepts during the summer. Concepts might include stream enhancements, piping, retention, or levees. Another public open house in September will review concepts proposed by the group.

Another option is inaction. Engineering solutions may be expensive, but the consequences of inaction may also be expensive after a historic flood.

Q: “I-5 has never flooded here in my lifetime, and I know there are culverts and such. What makes you so confident in this map?”

A: “This study used cutting-edge technology that gives us a better understanding of the land than we’ve ever had. Water follows the land, and this data shows us where that will be. These 1% flood events are rare, but more probable than impossible. It will happen at some point. It would be wrong to turn a blind eye”

Q: “How do you know that this flood would happen once every 100 years?”

A: “I don’t love the term “100-year flood” – it’s more about odds than timing. Floods happen under a mix of conditions. Rainfall is the most important factor, but there are others. Ground saturation, stream water levels, and other factors matter. Local floods in the 1990s involved rainfall on snow, for example. Models show a 1% chance in any year that environmental factors will conspire to produce flooding at this level.”

Q: There are new developments in Springbrook and along South Tacoma Way. Do these impervious surfaces add to the risk?

A: “The water that would flood this area is surface water that originates upstream elsewhere in Pierce County. Development regulations upstream may be a solution. Some unused areas of Springbrook might become undevelopable for compensatory storage. Our soil takes in water very well, so recent local developments don’t have much to do with Clover Creek flows. “

Q: “There’s a lot of talk about JBLM and I-5 – are they more important than the property owners and residents?”

A: “No, of course not. A major flood would be a threat to military readiness and to statewide transportation. WSDOT and JBLM will be important partners in any solution. They also have the financial might to help us engineer the best solution for Lakewood residents (and their interests).”

Q: “What is being done to track creek flows and groundwater?”