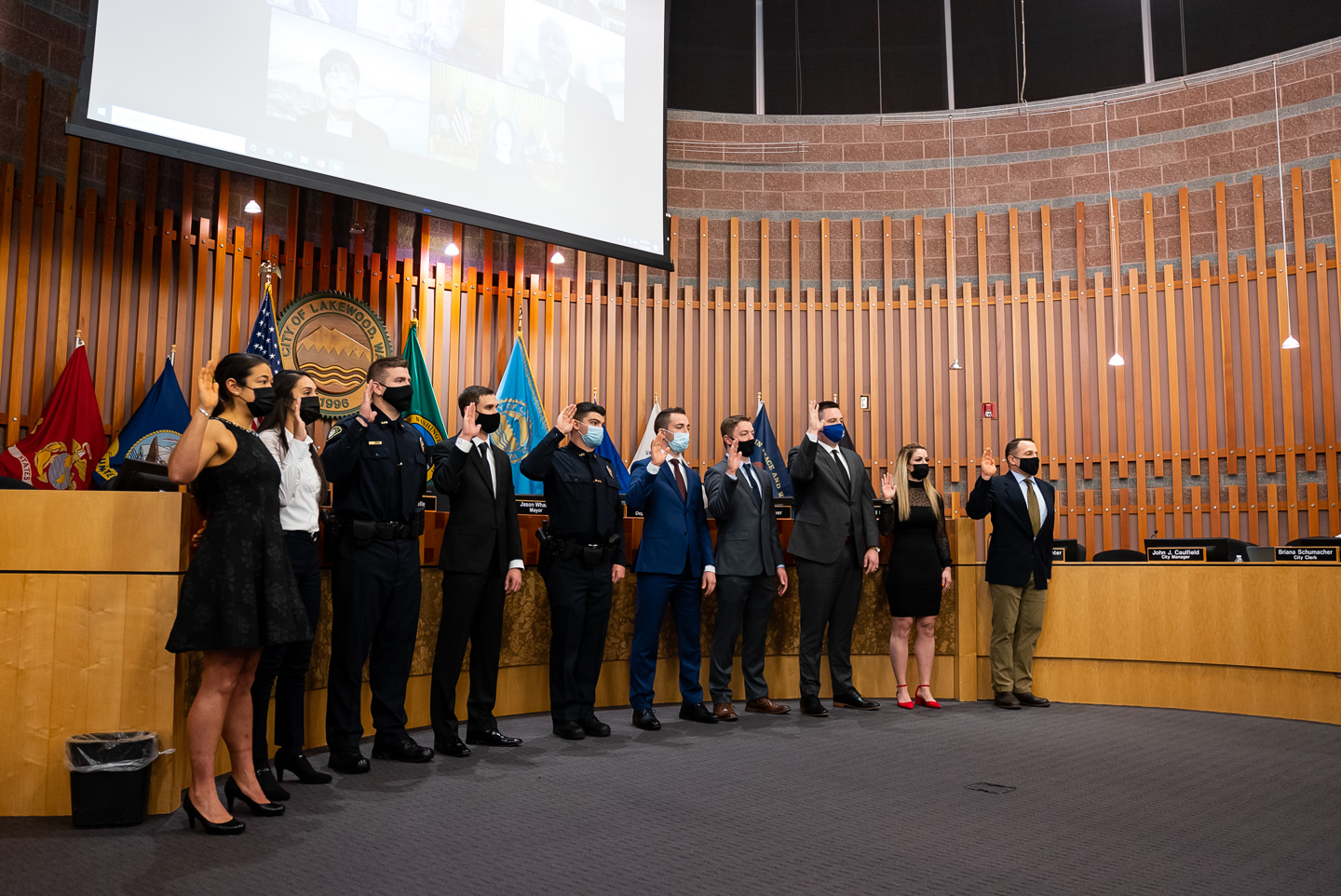 The Lakewood Police Department commissioned a class of 16 new officers on Tuesday, including 10 entry-level officers and 6 lateral officers. Two officers were promoted to detective.

Join Lakewood’s new mayor Jason Whalen for casual conversation about park improvements and summer events next Thursday, Jan. 27 at 6:00 p.m. on Zoom. The session is one of a new series of “Community Coffeehouse” events to be held bimonthly.

Lakewood is preparing to launch a new emergency notification service. Residents may sign up now to be reminded once the service launches March 1.

Customers with a missed yard waste pickup on Dec. 27 may call Waste Connections to request a bill credit.

The Lakewood Police Department welcomed a class of new officers during a Commissioning Ceremony on Jan. 18, 2022. 16 new officers joined the LPD ranks, including 10 entry-level officers and six lateral officers. Two LPD officers were promoted to detective.

The Lakewood Police Department lost a portion of its strength in 2021 to a wave of retirements. The new class of officers has restored the department to its full budget and will afford more resources to investigate neighborhood issues and property crime.

“Every officer here, including me, has been on a hiring list reviewed by this man. He helped to build this department from the ground up. He’s been here for 17 years, working as a volunteer, to make sure that Lakewood’s hiring and promotional practices met the highest standards… I’m honored to work with you and call you a friend.”
Mike Zaro, Chief, Lakewood Police Department

Each session will be themed and will begin with a presentation from the mayor or a guest speaker before opening the floor for residents with questions and remarks related to the theme. This session will be virtual, but future events will be in person once feasible.

Sign up below to be notified when the emergency notification program launches.

The City’s event calendar has been updated to reflect planned 2022 events. Summerfest is scheduled to return in 2022, and a new “Saturday Street Festivals on the Plaza” series of events is planned. Farmers’ markets, outdoor concerts, and many other events will return. Drive-in movie nights will not return in 2022.

Registration is full – all 32 team slots have been filled for Lakewood’s upcoming film contest: Reel Life ’96. Participating groups must create a 4-minute film in 4 days based on a theme. The films will be screened in March at a public event.

The Council approved a resolution for four affordable housing units to be included in a proposed 36-unit apartment project on Gravelly Lake Drive, to be called “Gravelly Lake Meadows”.

The City is negotiating with Waste Connections on behalf of customers whose yard waste was not collected on Dec. 27; more than two weeks have passed since the last collection and those customers are due a credit. The customers will be credited automatically.

CORRECTION: Customers whose Dec. 27 yard waste pickup was missed may call Waste Connections at (253) 875-5053 to request a bill credit.

The Tacoma-Pierce County Health Department recognized the City of Lakewood with a Healthy Communities Award for its work to publish an Energy & Climate Change chapter into the City’s Comprehensive Plan.

The Lakewood Multicultural Coalition provided an update to the council on their work to celebrate Lakewood’s diversity and culture. The council discussed the work plans of various citizen advisory boards, committees, and commissions. These bodies include appointed citizens that inform the City’s work on public safety, planning, landmarks and heritage, art, equity, tourism, lake management, and recreation.

Housing Program Manager Jeff Gumm briefed the council on the City’s Rental Housing Safety Program. The program allows renters to report safety and hygiene concerns so that the City can compel repair.

Need a job? We’re hiring!
Spot an issue? Report it!
Have an opinion? Share it!